SANTA FE, NM – Step right up ladies and gentlemen, place your bets! Pick your horse – sure to win! Your dreams can come true, come on in!

Today, someone else’s dreams will come true through the Annual Kentucky Derby Day party benefiting Habitat for Humanity. The horses in the derby were auctioned off at the party, prior to the race, and you “bought” the horse you won. The horses sold for $100 to $1,000 each and raised $10,500, which will pay for the framing of an affordable house for a family. Along with ticket sales and the silent auction, the party raised about $59,000 for the program.

More than 200 supporters attended the sold out recreation of the Derby, with big screen TVs, a sumptuous buffet and flowing libation. Many of the ladies wore large chapeaux, magnificently decorated with feathers, flowers, ribbons and bows … and your odd oiseau. After ample servings of fresh mint juleps, these ladies paraded in a circle past the crowd, who dropped dollars into the pails of their favorite models. Kimberley Hinshaw of Dallas won the hat contest, having postponed her cancer treatment to support this even more important event. (We’re praying for her speedy win, too!)

I know a family who got a Habitat for Humanity house. Steve and Nancy (not their real names) were immigrants to the U.S. (legal, actually); they were not well off and they lived with their three children in a cramped and decrepit two-bedroom trailer that they rented from some slumlord type who didn’t repair things (Steve did), among some unsavory neighbors who imbibed until and for breakfast, and set a bad example for the children in many ways. They yearned for a better situation.

Habitat for Humanity offered them the American Dream: Home ownership. A three bedroom house, with two bathrooms, a little yard and a nice neighborhood among a cluster of six other Habitat homes built together on a cul de sac.

They don’t just “give” you the house. It is not a handout, but a helping hand. You make an investment in it too, but your investment is not cash … they tell you up front it is “sweat equity.” You have to put in time, energy, interest and thought. The folks at Habitat believe, and there is ample evidence to support the theory, that human nature will take care of something in which it is personally invested.

On weekends and several times a week after his day job, Steve went over to “his new house” and worked on it with the crew. Nancy and the children went by every few days to watch the progress as “their house” went up, and their dad helped it become a reality. It took about 6 months of watching, waiting, dreaming and hoping. They have been there for 15 years now and they have prospered. The house is doing fine, too!

In the past 14 years in Santa Fe, Habitat has built 99 houses. House 100 is in progress as the Santa Fe Women’s Council of Realtors does a “women’s build” for the partner family, a single mother and her children. They won’t be stuck in a crummy trailer where nothing works – the women will make sure it is perfect. 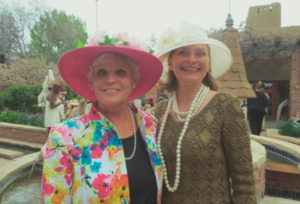 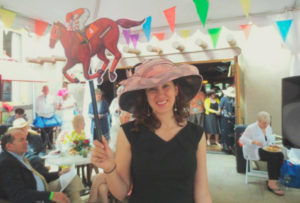 Michaelanne Cavazos horses around for Habitat for Humanity. 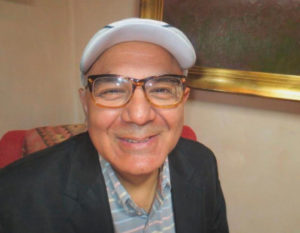 Frank Cordero looks like he picked the winning horse. 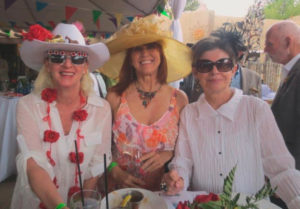 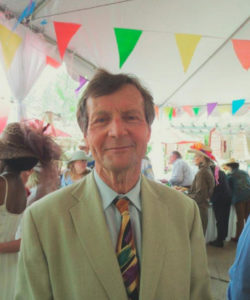 Greg McMillan was ready for the race Habitat for Humanity’s Derby Day party. 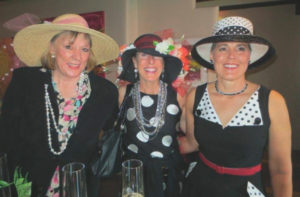 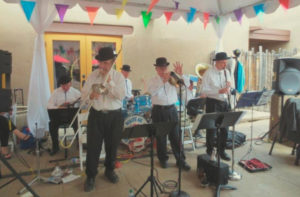 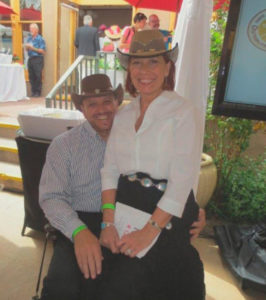 Vince and Kathleen Setnar were hatted for Habitat for Humanity.