SANTA FE, N.M. — The rain is pounding in from the north, so all the windows and doors on that side of the house are closed, but the ones on the south side are open, keeping it cool inside. I am reminded of the last big storm on an evening like this: Opening Night of Folk Art Market.

“Oh, no,” you might say, “How awful for those poor artists!” But the ramifications and blessing of that rain were that people couldn’t hang out in the open spaces, but had to run for cover under the spiderweb of colorful tents, getting caught in the maze of bazaar booths bulging with the best of the best of the Earth’s handmade folk art goods, where they were a captive audience, tempted and beguiled. The jubilant artists had record sales! The ecstatic shoppers were dry and fulfilled!
And, as always, there was amazing loot! There was that.

I didn’t even risk wasting time with a text! I called my husband from my cell. If you have an exceptionally large head, as does he, it is nearly impossible to find a hat to buy, especially a lovely one. But I found a deliciously smooth and lustrous, creamy, all-natural Panama hat at Vicente Alacan’s booth 106, and he said of course he had an 8½ for el señor! But he would not sell me one.

He must fit his hats on to the person! So Paul had to come over to the market to be personally fitted for his handsome new sombrero. A genuine Panama hat comes not from Panama actually, but from Ecuador, and from the harvesting of fresh rushes to the ultra fine weaving, Vicente’s are completely and endearingly “Hant (sic) Made,” according to the label. (I had to tell you! I found it as precious as Vicente! And also I come from a family of errata junkies.)

One might assume all of the artists and craftsmen were sweet, and contenders for Ms. Congeniality, but one would be mistaken. I heard the story of an artist from India who was insulted and offended when a fellow countryman of a lower caste than he was selected to show at the Market when he, of the higher caste, was not chosen. He spitefully snarled that his inferior would sell nothing! Upon hearing of this, my friend’s friend bought two pairs of his shoes, in part because she liked them and in part to prove the nasty man wrong. Apparently, the lowly artisan did very well indeed. A pox upon your high caste, sir!

Most of the artists prosper, especially by their country’s’ standards. This 15th Annual Folk Art Market raised $3,300,000, almost all of which went back home, significantly raising the standard of living of the people there.

Some 21,000 eager consumers passed through the gates, starved for fabulous and unique pieces for body and home, yearning to acquire the exquisite and the extraordinary – from slick inky Szechuan indigo clothing to minuscule Peruvian crèches, and from huge African basket bags to delicately embroidered Indian shawls, and felted Uzbekistani ones. There were lots of rug merchants reminiscent of the Marrakesh souk, and our own Federico selling his turquoise and silver filigree earnings. Tasty, unusual tidbits to eat. Places for package-laden husbands to sit. World music and dancers to match. And for the truly hedonistic, personal shoppers are now available for hire to help one assemble “a look,” with the P.S. fee going to the Market.
Part of the panache and allure is attaching it to the out-of-this-world Museum of International Folk Art. It’s another positive thing that continues to put SF, N.M., on the map big time and sets us apart as The City Different! So, welcome in 38 languages! Diane Case is one of over 2000 market volunteers. 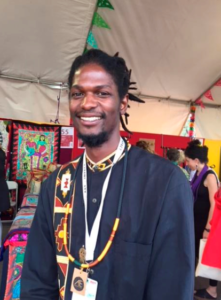 In real life Pam Najdowski is a vendor herself. 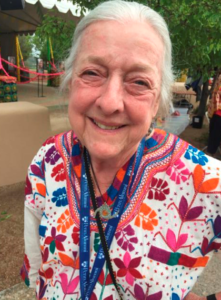 Melanie Owen just before the rain. 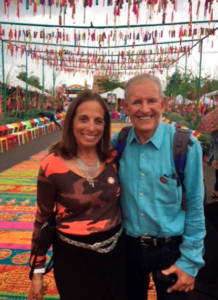 Sharon Woods and Rob Elliott on the path to joy!